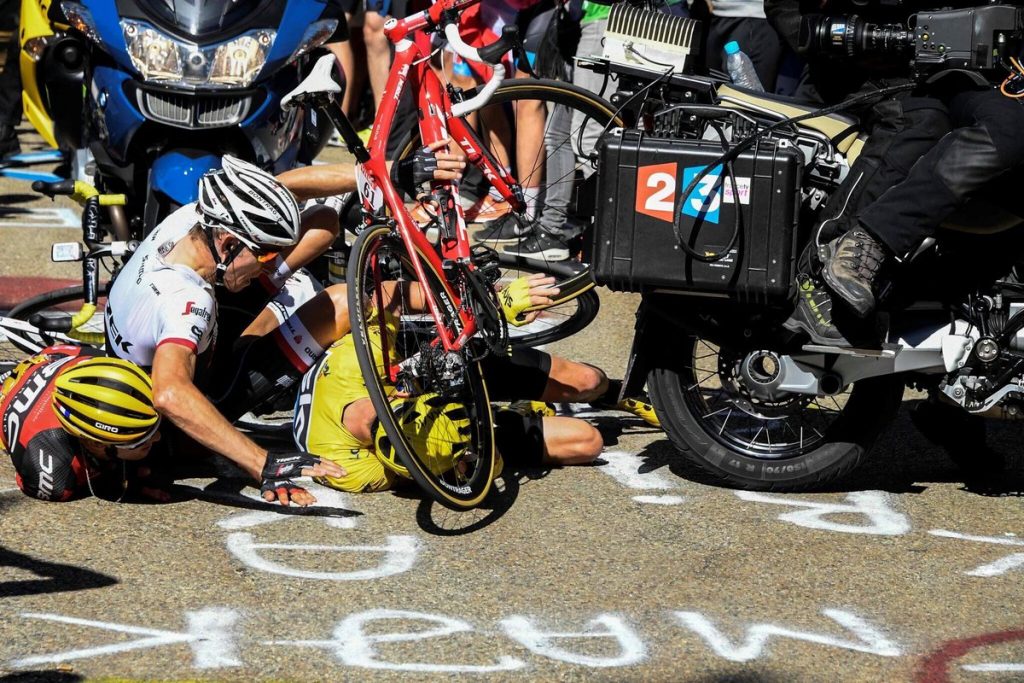 On the evening of 14 July 2016, Bastille Day, a National Holiday in France some idiot ploughed a lorry 2 km through the crowds at the Promenade des Anglais, in Nice, during the fireworks display. As a result, 84 people lost their life and 18 are still fighting for it. So, I want to make clear that everything that follows in this page pales into insignificance after the above events.

Stage 12 of this year’s Tour de France was from Montpellier to Mont Ventoux. Unfortunately due to bad weather the finish was set at Chalet Reynard, 5.7 km from the top. Due to strong winds there was some nervousness in the peloton and the breakaway was allowed to go and form a lead of 18 minutes. At some point the bunch tried to chase but due to the fact that there were a couple of crashes they brought it down to 8 minutes and stopped pushing further. None of the escapees was a danger to the GC, so there was no real reason to catch them.

Andre Greipel (Lotto-Soudal) was in the breakaway and he attacked before the foot of Mont Ventoux but he could not hold the pace and he got dropped. Three riders managed to split from the breakaway group; Thomas De Gendt (Lotto-Soudal), Serge Pouwels (Dimension Data) and Daniel Navarro (Cofidis) at 5.5 km from the finish.

Quintana, asked Valverde to attack to see reactions and Sky shut him down quickly. The acceleration caused Dan Martin to drop off the back of the group. In the meantime, up ahead, De Gendt attacks at 2.5 km from the top, Pauwels gives chase and counter-attacks. The breakaway group fragmented at this point.

Back in the second group, Froome accelerates. Richie Porte and Nairo Quintana follow him; the rest stay behind. Froome accelerates further and drops Quintana. Fabio Aru attacks the group and they catch Quintana. Then Mollema attacks and bridges the gap to Froome and Porte. So we have Froome, Porte and Mollema 10-15 seconds ahead of Quintana, Valverde, Aru, Yates et al.

At the lead of the race, Navarro reaches De Gendt and Pauwels stays with them for about 300 meters but they accelerate and drop him with 200 meters to go. Thomas De Gendt wins the stage, with Pouwels second. The rest of the initial breakaway group finishes in dribs and drabs.

Froome, Porte and Mollema attack each other but they are still together. Back in the chasing group Yates, Valverde and Quintana try to accelerate. Then Porte hits a motorbike that stopped in order to avoid a spectator. Froome and Molema pile on top of him and another motorbike hits Froome’s bike and breaks the seatstay in two. Mollema re-mounts and gets away. Porte has a mechanical but he manages to sort it out, get back on his bike and ride away. By this time the chasers reach the crash scene and pass Porte and Froome who has abandoned his broken bike and runs up the mountain, on his cleats. He gets a bike from the neutral service Mavic car, which is the wrong size and it has the wrong pedals for his cleats. Mollema crosses the finish line. Then Yates, Aru, Bardet and Rodriguez. A few seconds behind them finish Valverde and Quintana followed by Porte. Froome stops 400m before the line to get a team bike because his shoes slide on the pedals of the Mavic bike and he finishes with Sergio Henao, but  Dan Martin and Barguil have finished before them.

At this point Yates is in yellow. Mollema 2nd at 9 seconds, Quintana 3rd at 14″ and Froome 6th at 53″! De Gendt gets on the podium to celebrate his win, but nothing else happens because they are not sure they want to give the Yellow Jersey to Adam Yates and then take it back.

There were long talks between the race organisers, the commissaires, the affected teams and who knows who else and the result of that was that Froome and Porte are being given the time of Mollema. Van Garderen, Quintana and Valverde where given the same time as the Yates group; those three where in that group but they had to slow down as they were going through the crash scene.

So, Mollema, Porte and Froome where about 23 seconds ahead of the Yates group. Mollema fell too, and lost time. The group behind them was delayed in the crash scene but they were still riding. So it’s very hard to calculate exactly who lost time and how much in order adjust the finishing times. One more thing to consider is that Froome ran for about 100 or 200 meters without his bike. The UCI regulations explicitly say that you have to have your bike with you (pushing it, dragging it, carrying it on your shoulders/back). The other thing is that the organisers (ASO) have a responsibility (legally and morally) towards the cyclists to provide a safe environment for them to perform. Even after the crash, Yates almost fell off his bike because a spectator seemed to try to grab his arm! 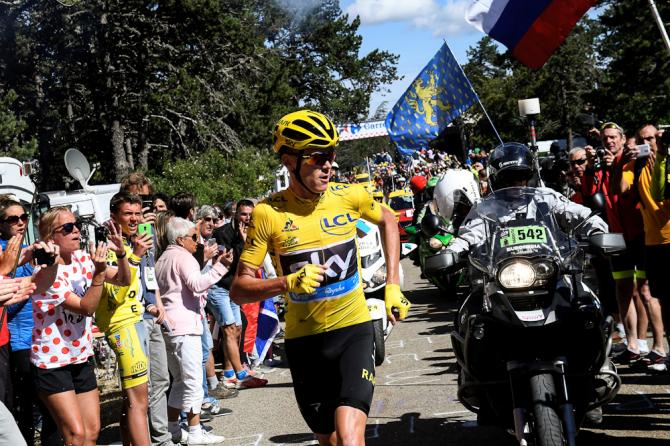 Mollema was not happy with the final results. His argument is that if Froome was not involved in the crash, then the commissaires would not have made any adjustments. This might be true but Froome is the race leader and it’s not really nice to see the leader losing from something that was caused by spectators. On the other hand during last year’s Clásica de San Sebastián, Greg Van Avermaet was taken down by a following motorcycle as he was leading the race. His bike and rear wheel broke and he did not finish the race! The UCI did nothing about that.

Considering all of the above, the time adjustments was the best the UCI could do, but the ASO needs to do something about the riders’ safety. This should not be happening. The strange thing is that the ASO and the teams were happy after the amended result. They shouldn’t be happy. The riders and the CPA should be a bit more vocal and ask for something to be done. The fans are excited when they see their cycling heroes passing through, but they should not behave like idiots by blocking the route or start running along the riders in a stupid costume for 15 seconds of TV time.

Now, for the actual racing we saw that Porte and Mollema can follow Froome’s pace, but Quintana does not have the form. I was hoping that his year and especially today he would attack Froome and put some time on him; it did not happen. Porte, though, seems to be as strong as we were hoping at the beginning of this year’s Tour. Hopefully Froome, Yates, Porte and Mollema will be able to put on a good show.