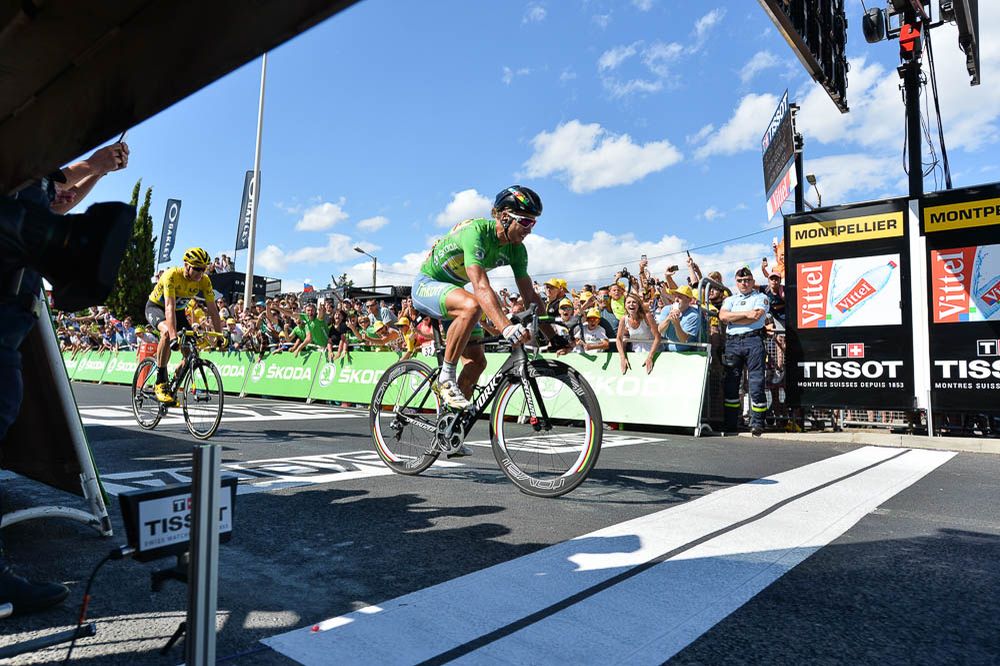 Stage 11 was supposed to be one for the sprinters. Strong winds in the morning dictated that there would be splits, echelons and panic. Well there was, loads of it.

The stage started and there was a breakaway of 2 that was kept on a short leash. Before the intermediate sprint, at 113 km from that start, the breakaway was reeled in and there a dash or the sprint by Marcel Kittel (Ettix-QuickStep), Peter Sagan (Tinkoff) and Mark Cavendish (Dimension Data) who crossed it in that order.

Then the crosswinds caused so many echelons and splits that everybody was fighting to stay ahead. Team Sky kept their leader and Yellow Jersey wearer, Chris Froome) near the front and safe. GC contenders Nairo Quintana (Movistar) and Adam Yates (Orica BikeExchange) were in front as well as sprint contenders Peter Sagan, Marcel Kittel, André Greipel (Lotto-Soudal), Mark Cavendish and Alexander Kristoff (Katusha).

Then at around 8 km before the finish, a 4-man breakaway was formed. Peter Sagan, Chris Froome, Geraint Thomas (Sky) and Maciej Bodnar (Tinkoff) just accelerated only to see that they had created a gap of 15 seconds. That was enough motivation to keep them going. As a result, Sagan gained extra points for the Green Jersey competition and Froomie put more time between him and his competitors with an extra 6-second bonus. So he has 28 seconds on Adam Yates, 31″ on Dan Martin (Ettix-QuickStep) and 35″ on Nairo Quintana.

The rest of the peloton were chasing but apart from “burning” men they could not do much. Cavendish had a mechanical and he was stuck on a 15-tooth cog and behind the chasing peloton, Ettix-Quickstep and Lotto-Soudal run out of men trying to chase down the breakaway and only Kristoff could have a go for minor placings. What really surprised me is that I did not see Movistar chasing for their leader Quintana.

It’s not often you see the Green and Yellow Jersey attacking on a flat stage and winning in that order, but I think that Team Sky are trying everything they can think off to gain an advantage on the competition, so it will all be quite interesting.

Tomorrow, is a 184 km stage, pretty flat with exception of a final climb up to Mont Ventoux. Due to 100 km/h wind forecast the they will cut it short. The new finish is at Chalet Reynard, 5.7 km from the top. It’s a to see a shorter stage, so I really hope that they wind eases, so we can see a race to the top. Oh, and if Nairo Quintana does not attack tomorrow, he has no chance of winning this year’s Tour.