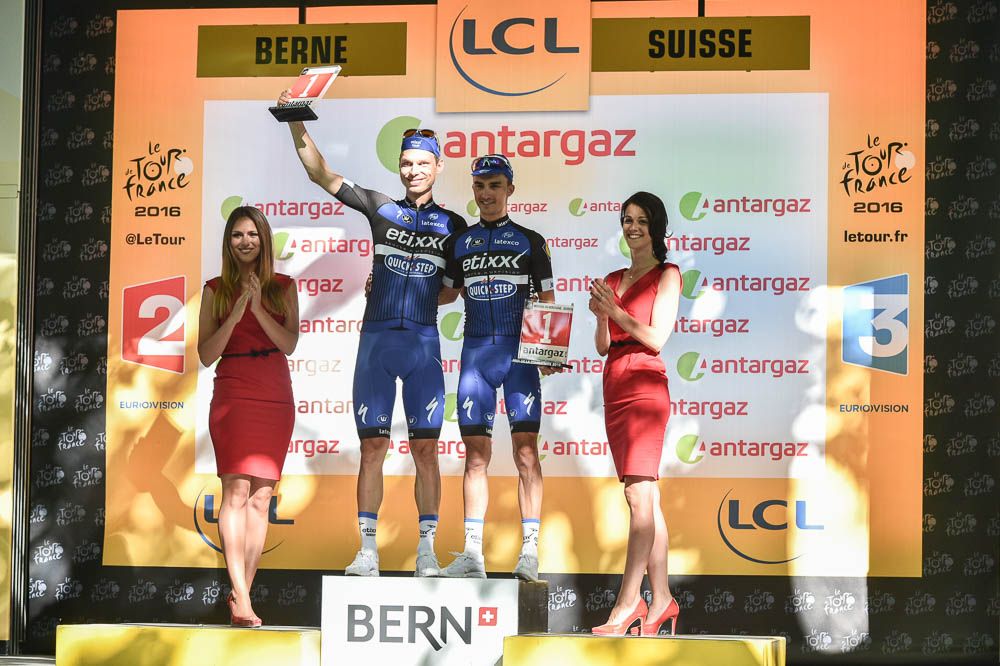 I was away for the weekend, camping in the middle of a field in Kent, so posts where not possible. Here is the update:

Friday, Stage 13, 37.5 km Individual Time Trial. I was expecting Chris Froome (Sky) to do well, but there were quite a few TT specialists who could do better then him. Nelson Oliveira (Movistar) held the top spot for a while with a time of 51:46; eventually he finished second, Eventually, Tom Dumoulin (Giant-Alpecin) was the best with 50:15. Froome finished second at 51:18. Bauke Mollema (Trek-Segafredo) finished at 52:09. This stage moved Mollema to 2nd place 1:47 behind Froome, Yates to 3rd at 2:45 and Nairo Quintana (Movistar) remained 4th at 2:59.

Saturday, Stage 14 was 208 km long with 3 cat 4 climbs. One for the sprinters, then. A breakaway of 4 men formed at 30 km that extended their lead to about 4 minutes. The sprinters’ teams controlled the race and Peter Sagan (Tinkoff) took the intermediate sprint when the bunch arrived there. At about 5 km from the finish, the bunch caught the escapees. Mark Cavendish (Dimensino Data) own the final sprint. Marcel Kittel (Ettix-QuickStep) complained that Cavendish changed his line at the end but he was already a bike-length behind so it would make any difference.

Sunday, Stage 15, 160 km in the Jura mountains. A group of 30 broke away and got up to 7 minutes away but the groups started thinning when they go to the slopes of the Grand Colombier. Rafa Maijka and Zakarin reached the summit. Team Sky controlled the peloton and shut down any serious attacks. Everybody was expecting a battle on the climb of the Colombier but it never happened. Romain Bardet (AG2R-La Mondiale) attacked but nothing really came out of it. Quintana could only follow the pace set by Team Sky. Froome pretended an attack to see any reactions but nothing happened. Tejay Van Garderen (BMC) lost 1:28 to Froome and the other GC contenders. Jarlinson Pantano (IAM Cycling) won the stage from Rafal Majka (Tinkoff) who were both still in the breakaway.

Monday, Stage 16, 209 km to Berne, Switzerland. Tony Martin and Julien Alaphilippe (both of Etixx-QuickStep) were on a breakaway for 173 km. A group of 4 tried to bridge the gap but failed. The sprinters’ teams controlled the gap and eventually caught them. Rui Costa (Lampre-Merida) attacked in an effort for a solo win but was soon caught, too. The sprint finish in Berne was own by Peter Sagan (Tinkoff) over Alexander Kristoff (Katusha). Martin and Alaphilippe both win the combativeness award which is the first time that is begin awarded to 2 riders.

Today is a rest day in Berne and mest people believe that Froome has won the Tour already. Team Movistar claim that everything is till in the air, which is true, but the current GC standings remind us of 2015 and 2013 when Froome had won. Froome gets tired on week 3 and looses a bit of time to Quintana who finds his form on the last week, but it’s not enough to take the jersey from Froome’s shoulders. Whoever will attack on stage 17 and/or 18 might pay for it on stage 20. So the people who are already on the podium might not do it. The others might have a go because thy have nothing to lose. Adam Yates is still young so he could have a go. I hope that something happens and we see some fireworks, at last.

One thing is for sure though, we should see a fantastic sprint at the Champs-Élysées with Cavendish, Sagan, Kittel and Kristoff.