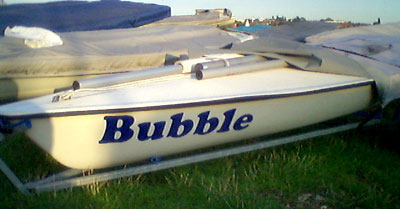 Today was my last racing Wednesday for this season. I am going on holiday on Monday so I will miss the actual last Wednesday of the series. I went at the club early in the afternoon because there was some Laser training. It turned out to be too basic, and it was decided that I would do cover the safety boat instead. I helped a new member rig a club Laser and then I went out on the safety boat. We had two capsizes. One of them was a complete inversion with the mast stack in the mud. I pulled the trainee on to the safety boat and Jane jumped off her Laser and pulled her boat upright. Then Jane went back to her Lazer the trainee back into hers. Twenty minutes later she capsized again, but since it wasn’t a complete inversion, we talked her through the recovery procedure and she managed quite well. Good for her! Now she knows.

After the training session was over I washed the bow of my boat on both sides and put the new graphics on. It looks brilliant! It happened to be right in the middle between the top of the deck and the water-line, so it looks perfect, I was told. I tell you what, It looks even better when you’re hiking! It’s really cool.

I rigged the boat and went out. During the starting sequence I was feeling quite uneasy. My watch got caught at the mainsheet and the “Start/Stop” button got pressed. So I was left with no watch really. I reset it at 1 minute and asked around for time. The told me 1’18” and after a while I started my watch. So my time was not spot-on, and while I was trying to get to a good position on the start line I found myself too close to the pin end. I was on the line and as soon as I heard the gun, I tacked to port and headed off! Very very bold move! Soon Steve called Starboard on me, but I honestly thought I could pull it off. I think he had to ease his mainsheet to avoid collision and he told me off, but very politely. He didn’t protest so I carried on.

It was a pretty good start for my standards. Bit by bit I was loosing positions, but I kept fighting. At some point it looked that I got settled into a position, but soon Perro, started approaching me quite fast and seemed like he would overtake me. On the upwind leg I used a bit of tactics and called starboard on him. As he tacked he capsized. That made things easier for me. I focused on catching up with Tom who was ahead of me. During the last lap, at the downwind leg I came very close to him. As we jybed I was coming from behind and I was about to pass him. Then I messed up. For some reason I though that the next mark was higher than the one we were, while in reality it was to leeward. So, as I was heading to high and as I was to leeward of him
and he was doing the opposite I had to bear away in order to avoid collision.

Then I realised my mistake but it was too late. The boat had almost stopped dead, and Tom was sailing away! I tried to get closer to him but the wind had died down by that time and my extra weight was a disadvantage. After I picked up some speed, I started getting closer to him, but it was too late. There was not enough distance to get really close, and even if there was, it doesn’t mean I could overtake him. He crossed the line 10-20 seconds before me. I really enjoyed the race today, although I could have done slightly better. Never mind, next time.

On Sunday I am not racing. ME some other people from the club, are going to be sailing from Eastbourne to Tilbury. It’s a big boat and it will definitely be a very interesting experience. I’ll let you know how it went and I will post some photos.