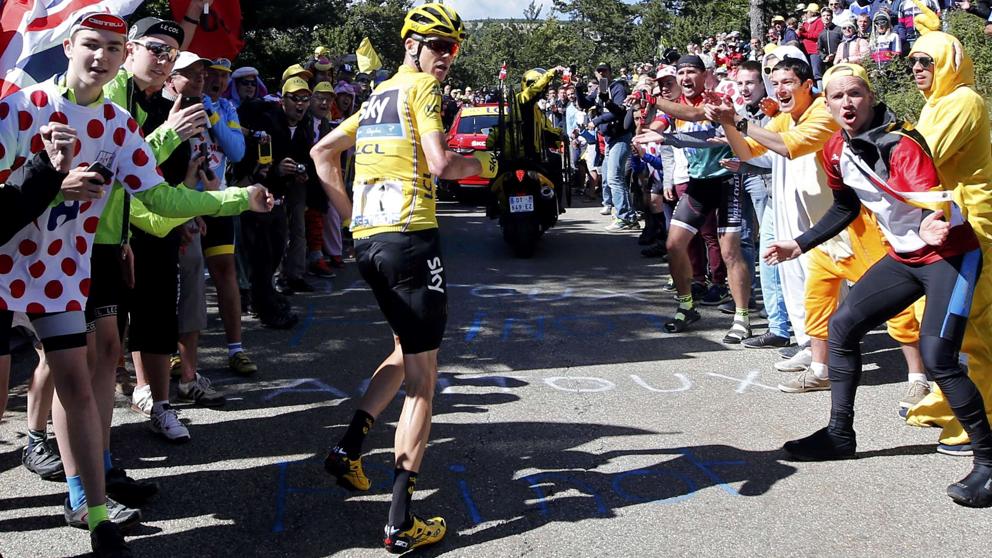 The Tour de France is finished and although everybody was expecting Nairo Quintana to set the fireworks, it never happened. The one thing that many people will remember for years, though, is the sight of Chris Froome in yellow running up Mont Ventoux. First of all let me say that Chris Froome is a worthy winner. The fans shouldn’t be allowed to be so close to the riders and all those motorbikes shouldn’t be there. Unfortunately they were. As a result the crash happened.

So Richie Porte, Chris Froome and Bauke Mollema are climbing up the mountain, in that order, the motorbike stops, Porte rides on to the back of the bike, Froome crashes on top of him and Mollema follows. Another bike that was following rode over Froome’s rear triangle and as a result the bike broke, literally. The drive-side seatstay was broken just under the brake-bridge. I don’t know if the rear wheel was damaged, too. The bike was unridable though. Mollema gets back on his bike and off he goes. Froome gets up grabs his bike and realises that its broken. Porte picks up his bike sorts out the chain that is dropped and he starts riding.

Then, Froome drops his bike and starts running up the mountain! When I started cycling at the age of 13, one of the things that I had asked is what to do if my bike breaks 200 meters from the finish line. The answer was: “Put the bike over your shoulder and run. As long as you finish with the bike the finish counts.” Simple! I need to finish with my bike no matter what. Ride, run, walk, push, crawl; just finish with the bike. I mean, even in Hollywood movies this thing happens. If you remember the scene from American Flyers where David Sommers crashes a few meters before the finish line, he grabs the bike and runs to the line. I bet, young Chris Froome had asked the same question and got more or less the same answer. Most probably he has even scene the movie. Instead, he decided to leave the bike and just run. The result was some controversy and booing at the ceremony on Mont Ventoux. If he had carried his bike, fans would respect him more. He did win the fans admiration by attacking on descents, on breakaways, on the mountains. Next time I want to see him running with his bike, though.

Chris, you are a professional cyclist. Don’t tell me that you didn’t know this part of the rules. You knew them since you started cycling. So next time, throw the bike over your shoulder (preferably the right shoulder so you don’t get scratched by the chainrings) and run. Ask a cyclo-cross rider, he’ll show you.

Let’s not forget, though, that the cause of all this mess was the huge numbers of fans on the road. There is also some footage of fans stopping the Sky Team car, further down the mountain to take photos with their mobile phones while Froome was needing his spare bike!

And we come to a more controversial case of ignoring the rules. Our dear Lizzie Armitstead. She missed 3 out of competition tests. That’s an automatic 4-year ban! It’s serious. For a professional athlete is serious as a heart attack. So, she appealed claiming that the 1st test she missed was due to an administrative error of the testers. When it happened, though, she did nothing about it. There is a process to appeal that right when it happens. Why didn’t she contest it when it happened? Why did she wait after the 3rd missed test to contest the 1st one? I am not saying that she cheated but I will ask you this: “What if Lizzie Armitstead was Russian?” She would be out. Isn’t that unfair?

The sport of cycling had too much bad publicity when it comes to doping. The truth is that football is much worse but in professional football the rules are different. So, The Beautiful Game is not clean, it only has different rules. Anyway, if Armitstead had won the Road Race in Rio, the whole thing would cast a shadow over her victory. Same as it was in 2012 at the Men’s Road Race when Alexander Vinokurov won. Not many people mention Vino’s Olympic win. Why? because he doped in 2007 at the Tour de France. I was disappointed to see Rigoberto Uran losing the Gold Olympic medal to Vino. So, hopefully Lizzie will leave this behind her and go on to win other races. But, this controversy is too fresh for her to win an Olympic medal. It’s too soon. She’ll bounce back and return victorious, again.

What if Lizzie Armitstead was Russian?

The most important thing, is for the sport of cycling to bounce back. Who can blame the cynics, when things like these happen?