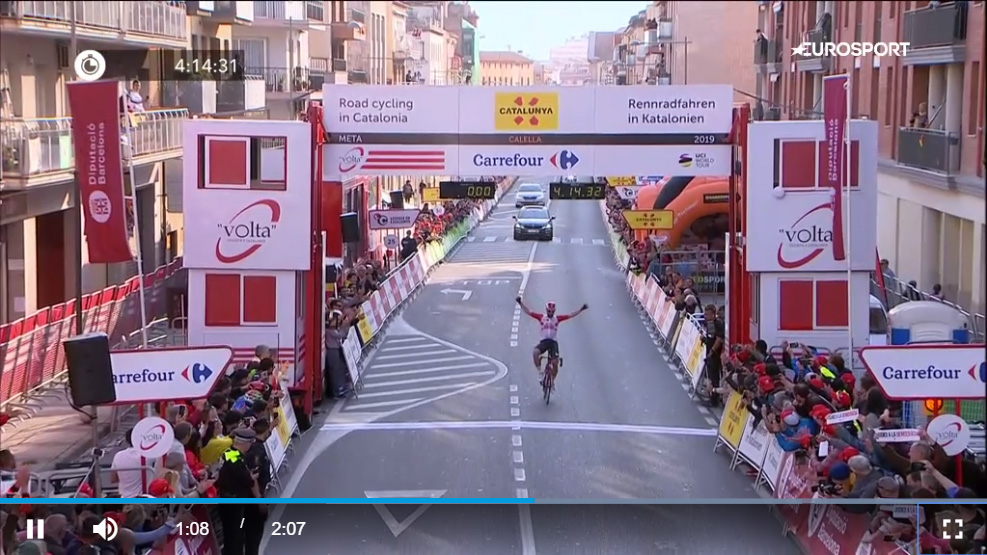 It has been going for 99 years no less. And many pros use it as training ground. They use to measure themselves against the competition this early in the season because every year they wonder if the overdid it with the Christmas pies. So they start slow, they tease each other, they look over their shoulder as they accelerate away, the see if they can hold on to the wheel of those accelerating and generally speaking they pretend that it’s all fun and games but they really watch out for any signs of underperforming.

So stage 1 of the Volta a Catalunya is under way and old TDG decides to get into the breakaway with the youngsters. And if that wasn’t enough he is showing them how to win all the points on the climbs. And since they are young and don’t pay attention to the class, he just takes off by himself.

Now, TDG has forgotten more breakaway tricks than most of them know. So he is diving down the descents and he is conserving energy on the climbs. The result is that he goes from 3 minutes gap to over 4 and when on the climb they see that they are catching up and they think that they have him. Only for him to accelerate on the next decent and increase the gap further.

And that’s when they realise that it’s all pointless and they sit up. But there was a young one who was actually paying attention in the class and he just jumps ahead and builds a gap. So, old Thomas De Gendt finishes first 2:42 ahead of the peloton and takes the leader’s jersey, the climber’s jersey and the sprinter’s jersey and Maximilian Schachmann [Bora-Hasngröhe] takes the young rider’s jersey just 2:38 behind Dr Gendt.

Another exciting race this week. If this season carries on like this with a great stage every week it will make 2019 he year of cycling. Fingers crossed, then!